Healing from a Covert Narcissist: By Michelle 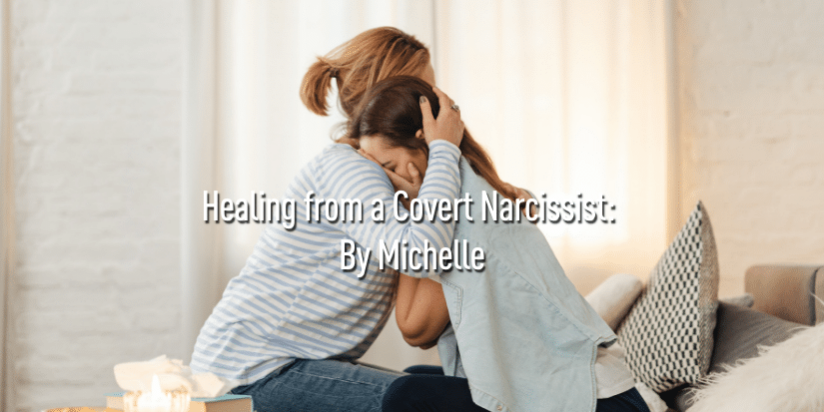 We are thankful for Michelle’s bravery in sharing her story of healing from a covert narcissist. She was captivated by the love bombing and, in marriage, became the victim of emotional, physical, sexual, and financial abuse. The stress, shame and confusion kept her silent for years. After nine years and three children, she courageously disclosed her entire story of abuse with her mom. Through the loving support of an incredible family, she and the children left him and started fresh with peace and love in their hearts and home. Michelle (not her real name) wanted to write her story to encourage anyone going through a similar situation. We hope it will do just that.

When I was 22 years old, I was a young vulnerable single mom with a 2-year-old son. I had dreamed of being a wife and mother for as long as I can remember. Although I had an extremely blessed life living with my parents who were incredibly good to me and supportive, I still had such a longing to find a wonderful man to be with and to build this perfect life that I had been dreaming of.

One day while enjoying myself at a casino, there he was. This man sat down next to me while I was playing a slot machine and I was instantly in love. He was incredibly handsome and charismatic. He was soft-spoken and I thought he truly was everything I had always hoped I’d find.

He was extremely successful in his work as a head supervisor for a large company. He was a country boy and owned a large piece of land. It was the most beautiful green pasture I had ever witnessed under the expanse of beautiful blue skies. I believed it was the complete dream I had been praying about for so many years. Upon meeting, our relationship moved pretty fast.

Soon, he met my son and was so involved and loving to him. He would read him books and push him on the swings at the park. Nothing could have been more picture-perfect at that time. We married after 9 months of dating and then overnight it all changed.

He did not like the city any longer. He was from the suburbs and his dream was to build a home on his property, so I agreed. I was nervous and sad about the move because I had never been away from my family. This was a huge change for me. The location was a little over an hour away from my hometown, so it was not too bad. At the same time, I was excited even though I was nervous about uprooting my life and the life of my son to move with him to the new property.

Soon after moving, I became pregnant with my second child. He treated me horribly throughout the whole pregnancy. He would often mock me, saying things like, “Oh, pregnancy is easy, you are just weak.” He truly stole all of the joy out of bringing a new precious baby into the world away from me. Upon the birth of our child, he refused to help me in any way whatsoever. Instead, he made horrible remarks about me, degrading me as a mother especially when I had trouble soothing the baby. He mocked, “A real mother would know how to calm her child.” I felt broken and so sad.

I was blindsided. I never had any idea that the man I married, the man that I had so much faith in, could be capable of such horrible things. It seems as if it all started once he got me away from my family and he felt they were no longer a threat to his schemes. He went from the man of my dreams to a monster so quickly.

I was subjected to emotional, sexual, and psychological abuse. He was extremely demanding when it came to sex and felt he owned my body and that it was his to do whatever he pleased with. I was constantly in fear, never knowing what would happen. I felt as if I was walking on eggshells every day and it was unbearable. He limited my access to all of our funds. I never had a way to get money when I needed it for our family.

He controlled every aspect of my life.

Every day, I was sinking deeper and deeper wondering how my life went from contentment to a living hell so quickly. Two years after having my second son I found out I was pregnant with our third child. He was absolutely LIVID by the news. He looked me in the eyes that day and told me that he hoped I would die and that the baby would die. He told me that if it lived, he would disown it. To this day, even though it’s been six years since he said those words to me. I look at my precious daughter and I can’t believe that anyone, especially a father, could speak that way about their own child.

It took me nine long years to finally tell someone what was going on and to ask for help. I told my mom everything. And when I say everything, I mean everything. I am so lucky and thankful for my parents, as they were there with me every step of the way. They encouraged me and validated me. They helped help me find a place of my own and moved me in with my children.

I still struggle daily with all of the trauma I had to endure. Yet, I am also thriving. I have a wonderful job and my kids are thriving as well. We are happy. Most importantly, there is a peace in our home which we did not have before.

Sometimes, I am asked why I stayed so long. The best way I can answer this is to say that the manipulation which comes with emotional abuse is so very severe that it is so hard to get out. There is so much brainwashing and playing of mind games against you that it is nearly impossible to figure out what is going on long enough to recognize the need and make the decision to leave. He would often change tactics and douse me with a lot of love confusing me even more and making me stay longer, because I wanted the love and it felt good! I felt so crazy.

If you are reading this and going through something similar, please know that you are not alone. You can move on and heal from this. You can build a life where you are safe and content. Don’t ever feel hopeless or as if there are no ways out! You can do it! Do it for yourself and for your children. You deserve to be happy and they deserve to have a happy mom.

I am healing now and it will take a long time to recover but I am on my way. Don’t give up and remember you are worthy and abuse is never okay.