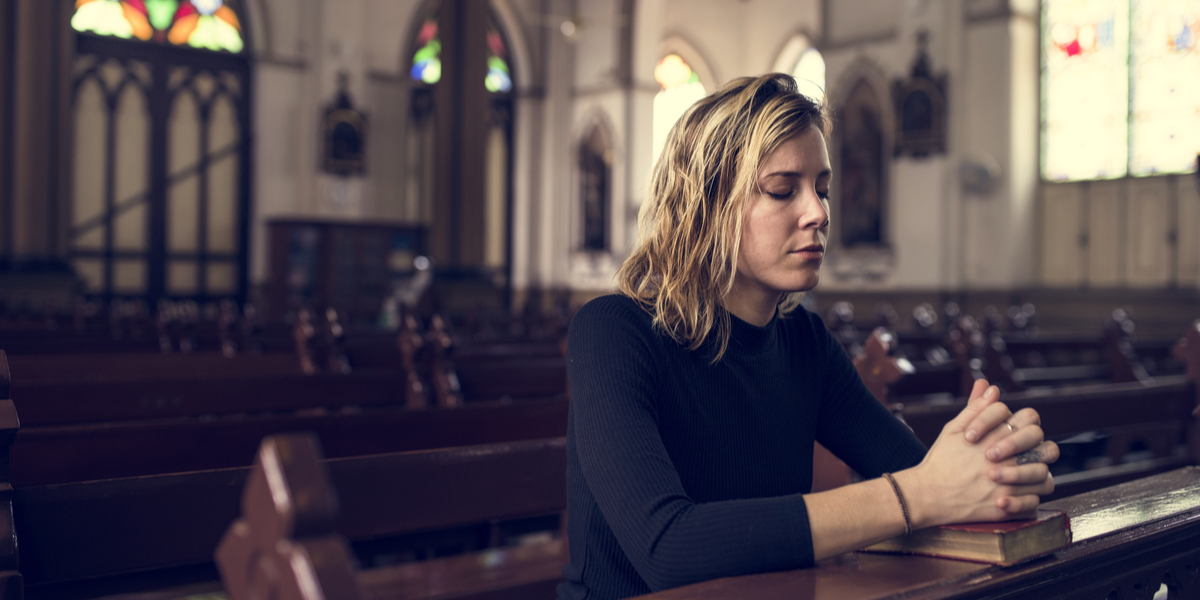 If only I knew what I was going to hear before the phone rang and I decided to pick it up. I wonder if I would have answered; if only I had known. Within minutes, I realized that this was a conversation I did not want to have; in fact, I was not at all equipped to respond. I cannot fully explain the horror of hearing the news that one of your most valued leaders, a man whom we trusted implicitly and loved as a brother, was being accused of sexually violating several young women over many years. Several women. I didn’t want to believe it was true. In fact, it was almost impossible for me to believe it actually happened. I had no idea or suspicion that this took place if, in fact, it took place. Truly, this is the worst news a leader could ever hear.  If only, I never picked up.

The fact is sexual abuse happens far too often. It is violent, destructive, and it is wrong. When it happens at the hands of someone you trusted, who you looked to for spiritual guidance, believed to uphold integrity, and moral conviction, it is devastating to the core. No one wants to believe it’s true, especially when you have only seen the “other side” of him. This is the crux of the dilemma for a leader who learns that a valued member of their team is being accused of sexual misconduct and abuse. Will you assume it’s not true because it doesn’t resonate with your experience of the individual? Will you treat it as a false accusation aimed to destroy your organization and reject it outright? Will you treat it as an enemy attack on the ministry and fight it with all your might? Or, will you be brave enough to take steps to do your due diligence, eagerly learn the truth and do whatever it takes to repair their victims?

Later this week we will outline what constitutes institutional abuse and how horrific it is for victims to experience. In today’s blog we will share a true story regarding a large ministry that engaged in institutional abuse to protect their leader and limit their liability. You’ll see how their initial course of action had the opposite effect by significantly increasing their liability and harm towards the innocent further.

Deciding how you will respond when this happens should not wait until it happens. The stories that have unfolded over the past few years at RZIM, Ravi Zacharias’ international ministry, regarding Zacharias’ repeated, repulsive sexual violation of many women and his individual and his organization’s chosen responses demonstrate what happens when you shut down allegations and wait to decide. Their example illustrates for us the power that an institution’s choice has to add greater harm or to heal, and their choices did both. If only RZIM had instilled proper protocols before they were first faced with the fact that their friend, colleague and prized public minister, Zacharias, was being accused of sexual molestation, perversion and abuse. But they hadn’t and their first response, most notably to Lori Anne Thompson, was to doubly abuse her by denying her claims, refusing to hold Zacharias responsible, allowing him to attack her through a countersuit, and vilifying her and her husband publicly. All the while, Ravi Zacharias was protected and emboldened in his behaviors allowing him to continue to bear a false facade to his colleagues, family and friends while he repeatedly abused and harmed other women. If only this were an isolated incident. If only they were the sole organization in the news who responded horrifically when faced with similar allegations. But they are not. Over the past several years, the news has been filled with these types of bad examples within and outside of the church.

Fortunately, RZIM eventually chose to respond the way we recommend they should have responded all along but it took an article published by Christianity Today exposing the truth for this to happen The true challenge for many of us when reading RIZM’s public apology letter and the results of the independent investigation conducted by outside counsel is in trusting their motives. If only this was how they responded years ago while Zacharias was still alive, we wouldn’t be left wondering. But whether or not you trust the heart behind RIZM’s present response, join us as we take time to illustrate a few things you could do, which they did really well this time around:

RIZM not only hired outside counsel to conduct an independent investigation of the allegations made, they authorized a wide scope and authority for counsel to investigate past and present actual claims, unknown claims and any other sexual misconduct by Zacharias. They also sought outside support to review their internal operations and submitted to an ongoing training and reconstruction process to ensure similar wrongdoing would not reoccur. And they are submitting to ongoing dialogue and training regarding abuse as a result of the investigation’s conclusions.

Far too often, institutions handle investigations of these types of claims “in-house.” In faith-based organizations, for example, it’s often the elder board who investigates claims against the lead pastor, who is usually someone with whom they are in very close personal relationship. Their history in ministry and relationship make it almost impossible to believe the pastor could actually be guilty of the misconduct alleged. By ensuring a truly independent team is evaluating any such claims the institution takes an uncomfortable and potentially compromising burden off of the staff or leaders within the ministry who may or may not be under undue pressure to resolve the matter favorably to the accused.

RIZM ultimately acknowledged that they were wrong about Lori Anne Thompson’s allegations in 2017 and expressed deep remorse for ignoring her and slandering her.

If this is all they did, it would not be enough. Please understand that there is virtually nothing they can do to adequately recompense Ms. Thompson and her family or any of the other victims for the harm, in fact torture, Zacharias and RIZM enacted upon them. It will take years for this family to heal from the damage they experienced. The words in RIZM’s letter cannot change that and no amount of money can eradicate the pain the Thompson’s underwent. Yet, the words are necessary to bring healing.

Whenever an institution or individual harms others, true accountability requires that they publicly (if the victim requests it) and privately specify the wrongful behavior and admit that they were wrong. RZIM  acknowledged that Lori Anne’s allegations were true. They apologized for not believing her from the beginning. They admitted that because they did not believe her, they perpetrated a false narrative about and against her and her family. And they confessed that they slandered her and her family and caused prolonged and intense suffering upon them. When confronting perpetrators about harm they have caused, it is important to require them to experience the full consequences of their actions in addition to apologizing for what they did wrong. Requiring that the wrongdoer to identify the wrongful behavior by name is critical for both the victim’s and the abuser’s healing journeys. A blanket apology is insufficient for full accountability.

All too often, organizations seek to protect themselves by keeping secret any misdeed that takes place. Often, they justify the secrecy “to protect the integrity of the institution,” “to prevent harm to their overall ministry,” “to avoid liability”, and often, to deceptively “protect the privacy of the alleged victims.” True repentance requires full transparency. RZIM is choosing transparency by releasing the complete results of the independent investigation without amendment. They are also making public the ways they have found their organization lacking, as well as the corrective and redemptive actions they are taking.

RZIM respected victims’ requests for anonymity and privacy, but didn’t let that stop them from apologizing to them. They validated all of the victims by stating that “we believe” all of you. They acknowledged their remorse by communicating that they were devastated and filled with sorrow.  They also humbly acknowledged the pain and trauma Zacharias’ family would feel at the public release of the investigation; notwithstanding the grief they know the publication of the investigation would cause. RZIM chose to prioritize the objective to provide all of Zacharias’ victims with the validation they need and deserve. Lastly, RIZM acknowledged the trauma Zacharias and their actions caused the victims and their families and expressed their desire for them to be restored to wholeness.

True repentance requires a willingness to maintain accountability and to face any outcomes your behavior caused.  RZIM could have placed the entire blame on Ravi Zacharias and washed their hands of any responsibility, but they correctly chose not to do that. They recognized their failure to maintain proper oversight and accountability for Zacharias, even when some of their team questioned his words or behavior. They acknowledged that their overzealous trust in him and failure in oversight enabled or at least significantly contributed to the harm that Zacharias caused.

When all is said and done, we are grateful for the steps RZIM has taken in the last few months and hopefully will continue to take. But we would be remiss if we didn’t say, “If only they had properly responded earlier on.” If only.

The M3ND Project educates, equips and restores all those impacted by abuse through training first responders, like RZIM, about emotional abuse and how to prevent Double Abuse, such as that which RZIM imposed on Zacharias’ victims through their initial harmful responses. The M3ND Project provides tools and resources to help individuals and organizations to respond in a compassionate and healing manner when an abuse victim comes to them for help. Join us learning more about institutional abuse as we teach about this important issue in our next blog.

Please don’t wait until you receive the call about allegations of abuse against one of your team to learn how you should respond. It will be too late. Educate yourself now and adopt proper protocols. It could make all the difference in the world.

Sign Up for our Free Monthly Training on March 25- https://us02web.zoom.us/meeting/register/tZUlce-rqzsiGtDduk87L8iadhI1L9jZa4jN

Sign up to Learn about our Comprehensive Curriculum Launch Date- https://themendproject.com/i-want-to-help-someone-being-abused/gain-tools-to-respond-to-abuse/

To Learn More About Being a First Responder- https://themendproject.com/i-want-to-help-someone-being-abused/