The Emotional Abuse of Entitlement 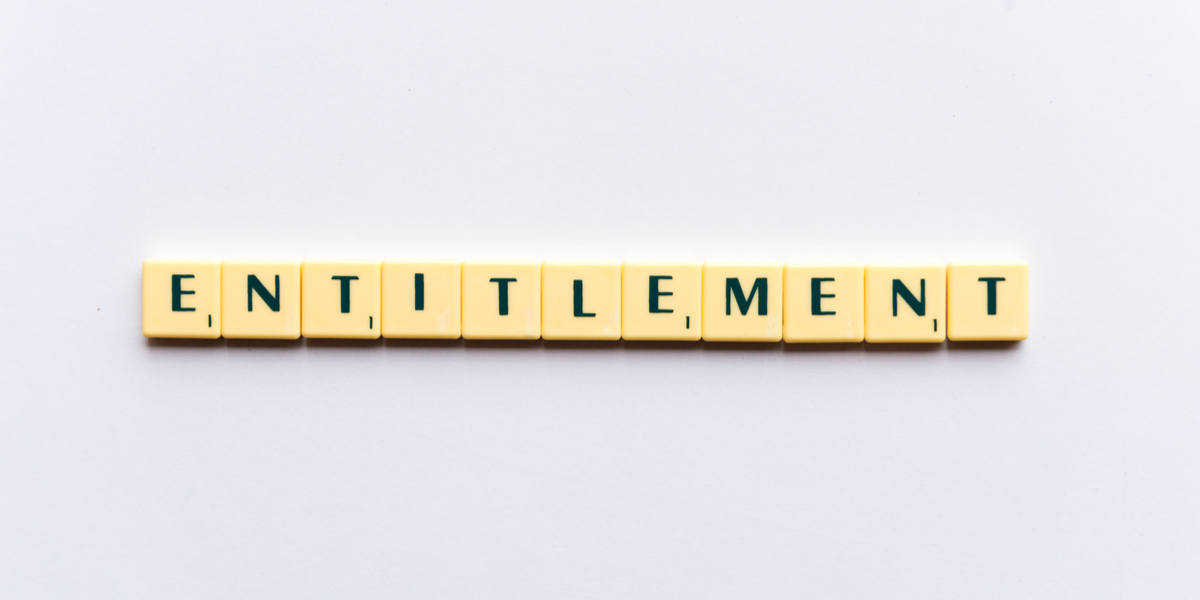 “I have asked him time and time again, not to take a picture of me in my bathing suit. He just won’t listen. I finally said to him, ‘You need to stop. I have established a clear and reasonable boundary regarding this topic many times. I don’t like to be photographed in my bathing suit and I particularly don’t like it when you don’t respect my wishes. Please respect my boundaries.’ He finally responded with a firm, ‘No. As your husband, I get to take whatever pictures I want of you.’ In other words, ‘as your husband, I am entitled to treat you this way and you’re not allowed to question it.’”

This is entitlement in action, a form of covert emotional abuse. It is not okay.

Entitlement is one of the four pillars of Covert Emotional Abuse. A pillar of abuse is a foundational structure protecting abusers from being held accountable for their actions and which sustains covert and overt abuse. At their core, abusers believe they are entitled to special treatment, double standards, regardless of the needs of others. Their attitude is such that they think they deserve to be treated better than everyone else, and others aren’t worthy of receiving the same favor. It’s one reason why abusers expect their partner to treat them better even while they minimize their partner’s place in the relationship. This is especially true of narcissistic covert abusers.

First responders play an important role by way of their own personal actions which might inadvertently be fueling an abuser’s sense of entitlement. When a victim alleges abuse, it’s critical that first responders not be distracted by the alleged abuser’s sense of entitlement. It’s why the abuser may refuse to do things like therapy where they may be confronted. Entitlement plays a strong part in avoiding responsibility, to make amends or reparations. Entitlement wrongly provides a license to do whatever they want whenever they want. Anyone can get caught up in this mentality from time to time, but someone abusive will use entitlement to internally justify their behavior rather than to recognize and repair it.

An emotionally abusive dynamic can be difficult to detect. Entitlement is a quality that is normal in young children who don’t possess the mental and emotional maturity it requires to understand that they are not the center of everyone’s attention all the time. When children don’t receive something they want immediately, you can typically expect some tears and a temper tantrum to follow. Psychologists believe this is a natural and healthy part of a child’s cognitive and emotional development process. However, as we age, that child-like sense of entitlement gives way in exchange for love and respect for others. Many emotional abusers side-step this important developmental process even into adulthood, which causes significant strain on their relationships and even themselves as they carry unrealistic expectations and tend to think in terms of what they are owed rather than what they can give.

For instance, men from patriarchal societies or families may develop with a sense of entitlement where they may have witnessed “machismo” ideas or similar mindsets, such as assuming women are less intelligent or capable and therefore, only sufficient for serving men. On the other hand, some women who come from more matriarchal settings who were always treated as “the princess” may struggle to overcome the idea that the people around them, including their partner, have equally important wants and needs.

Entitlement can manifest in myriad ways in an adult relationship, but these are among the most common:

Couples may choose to share or not share their finances in varying capacities, and that’s okay. What’s not okay is when an entitled partner aims to control or spend the other’s money without their authentic consent. If your partner disengages from you or grows angry because you don’t allow them to solely control or spend your finances the way they want, you are likely dealing with the stress of attempting to establish equality with an entitled partner.

Choosing to have children is a huge life decision and should be a mutually consensual choice. Children add more responsibility to the relationship and require significant sacrifices from each partner. Entitlement reveals itself in a relationship when the man pressures his wife into having kids, particularly when he knows she does not want to or is not ready. On the other hand, a woman should not feel entitled to having kids if her husband or partner has clearly stated from the beginning he is not comfortable raising children yet. Both scenarios are a form of entitlement which can lead to violating trust and a host of long lasting problems.

3. Sexual Activity You're Not Comfortable With

Sexual intimacy is a beautiful part of a relationship; however, it can be tainted quickly if your partner tries to take advantage of you or disrespects your desires. While you are in a relationship, your body is still your body, and you have the right to communicate what you are comfortable with and not comfortable with. Abusive partners may carry entitlement into the bedroom, pushing boundaries to get what they want. Continually nagging and pestering even after they have been told “no,” or acting angry when something does not go their way may be a sign of a much deeper problem.

It is hard to draw a clear line between what is important to tell your partner and what to keep private. In the earlier stages of a relationship, one partner might not feel comfortable sharing more personal current information or things from the past. For example, the woman might not feel she needs to share the things she discusses with her friends, while the man might not want to share his income and financial information. Trust must precede vulnerability, but an entitled partner will try to gain access to private information no matter the established level of trust, as if they are entitled to see your private texts, emails, voicemails or other communications.

Every relationship will involve compromise, and selfishly, we wish we could have all of our needs met all the time, but feeling entitled to something just because you are in a relationship is not healthy. If you feel entitlement is creeping into your relationship, it is good to retract and have a discussion with your partner. Here are a few ways to go about this.

Come into the Relationship With Clear Expectations

Discuss with your partner at the beginning of the relationship what you want the relationship to look like. How do you want to handle finances? What are your own love languages/needs? These kinds of conversations could reveal if your partner has unhealthy expectations, in which case, it is better to hold off before entering into any kind of commitment. It’s okay to heed red flags and end a relationship.

Hold Space for Each Other to Be Assertive

Especially at the beginning of a relationship, it’s common to deny our own needs and wants to accommodate our partner out of the desire to make them happy. While it’s good to honor one another, healthy relationships require a space where autonomy can continue to develop in an environment of mutual respect. Engaging in open and clear conversations about each other’s feelings will create room for each other’s needs. If you do not feel comfortable doing something with your partner, even if you have said yes to it before, it is okay to say no.

Entitlement is not often recognized as a pillar of abuse but if you look for it you can detect it even if you are a first responder. Entitlement can also creep into a relationship unintentionally as one or both individuals get used to asking more and more from their partner. Before it spirals into something unhealthy, communicating reasonable boundaries and addressing expectations are necessary to keep the relationship on track. If you’d like to read more about entitlement or other forms of abuse, look to the links below.