Finally Things are Going to Change: The Story of Leaving a Covert Narcissist 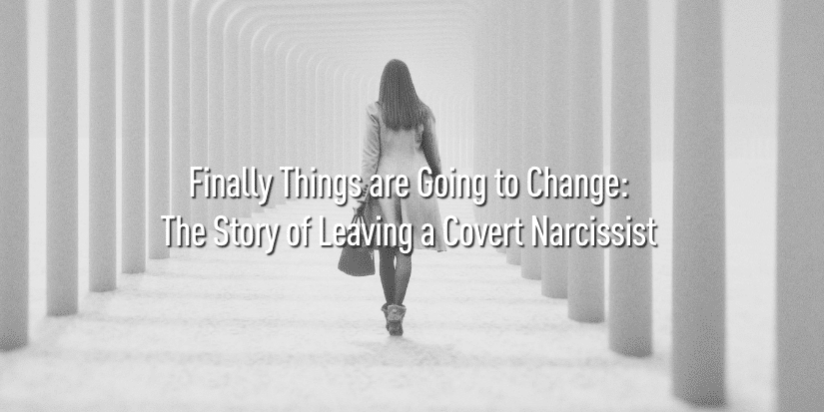 In this brave story by Michelle (not her real name), she shares her journey with a covert narcissist, her soon-to-be ex-husband. No matter how hard she tried or what she did to support her partner, he minimized, rejected, gaslit, lied, degraded, and attacked her. He withheld intimacy and personal connection every step of the way. But she is on the mend, healing on her own with a family who supports and loves her. We believe it’s important to share these stories in order to increase awareness about emotional abuse, to bring validation to other victims or survivors who experience similar things that Michelle has experienced and to provide hope in the healing that can come once the abuse is stopped.

I met my soon-to-be husband online. He seemed to be everything I had been searching for and more. I was the happiest I had been in my entire life. Here was someone who was supportive, funny, loving, and affectionate.

Fast forward to 3 and a half years later, and we were about to be married. He was not really interested in helping plan the wedding other than to allow his mom to take care of the catering and photography. On top of that, we had just bought our first home and were in the process of moving. We were both very stressed and I just chalked up his behavior to that. However, once we were married, it was like he completely changed into a different person. He had been married before and had a child from that marriage. I thought I was prepared to be a stepmom and everything that came along with that. However, I could never do anything right in his eyes.

That first year I came home with gifts from my family for Mother’s Day. He couldn’t understand and had not gotten me anything as I “wasn’t a real mom”. Before we were married, we agreed we wanted children. But once we were married, he would not allow me to get pregnant. But I cared for my stepson who also had behavioral issues and was diagnosed with ADHD. I work in the mental health field and I told my husband that his son should be seen by a behavioral specialist instead of just taking the pediatrician’s word for it especially when he continued to have issues at school and ended up in trouble for hitting other kids. He vehemently denied my requests, saying that I didn’t know what I was talking about since I worked with adults and not kids.

I soon began to see that our relationship needed help and we started therapy right before our first wedding anniversary. However, it was not a good fit, all she could really say was how does that make you feel. We also had our honeymoon coming up as we got married at the height of COVID-19 and had to postpone it. We did have a good time and I thought that since we didn’t have all the distractions back at home that things were going better. In fact, he bought me a necklace and a pair of earrings and he apologized for being an asshole for that last year. I thought things were finally going to change.

Things did not change. They only got worse. Suddenly his moods were so bad that I dreaded going home after work or him coming home from work. I could not do anything right no matter how hard I tried. I made dinner too early, I was too picky of an eater, all I did was go to the store, clean the house, read, and watch tv on my day off, I wasn’t the size I was when we first met, I wasn’t willing to do things in the bedroom he wanted, my family were “parkers” and did nothing, and my job did not pay me enough and wasn’t my dream. He withheld affection for me, which was devastating as my love language was physical touch, which he knew as we read that book together before we were married. He would jokingly say “Is your love tank full” when he knew clearly it was not. I was in constant fear of being criticized, belittled, and blamed.

I had discovered marijuana in our garage about a year and a half into our marriage and soon discovered he had been lying to me our entire relationship. It soon became a major issue as I would not tolerate him doing drugs, especially in our home. I said I wasn’t okay with it and he said he would choose it over me.

I soon discovered more lies like his pornography habit. One day, in a fit of rage, he broke my laptop when I was trying to complete some work because I told him I needed a few more minutes. He told me that wasn’t good enough for him. I will never forget being so terrified in that moment. I thought, “What am I doing with this person?” I contacted the pastor who did our premarital counseling and married us. We met a few times. After that stopped, we started with another couples therapist. At first I thought she was a good fit but suddenly the sessions became so confusing and focused on how I was the problem. I often ended up in tears as I felt like I was being attacked.

He would act like things were perfectly fine and he would just put on this act. I even told her once that I thought he was acting and he made a comment in the past that he was a great actor. She stated that she didn’t think that was true. Yet, I knew he had been in therapy for years after his first divorce and had learned exactly what to say. I decided that I was no longer going to do therapy and he held that against me as well.

I lived in a fog of constant fear and confusion for almost 2 years before I decided enough was enough. When I finally said I couldn’t do this anymore, he spouted off terrible things like I would never have to see him or his stepson ever again, which I never really connected with anyways. He told me that I could start a family with someone else and move north closer to my family. He told me that I had to leave as this was his dependent’s school address (his son went to school in a different county) and that he was taking our dog. I said that this was not fair but he would not bend. He said that I could come back anytime to get my stuff and that the house was half mine.

So I left with a small bag of my items and moved back in with my parents 45 minutes away. He attempted to call me 5 days later and once sent a text saying he hoped I was okay and that he missed me. I moved all of my things out while he was at work almost a week later. The whole time, I was terrified that he would be there or that all of my stuff would be out on the lawn, ruined as it had been raining. He angrily texted me when he got home that I should have let him know that I was coming to get my stuff and that there was no chance of reconciliation then. I filed for divorce 2 weeks later thinking the hardest part was over. I was so very wrong.

The divorce process has been extremely difficult and expensive. He filed a temporary restraining order on our assets which means our house cannot be sold until we sign a settlement agreement. I have signed 2 different versions of this and his lawyer keeps changing things. It has been the longest 2 months of my life. It should be over soon, I hope.

It all doesn’t even feel real anymore. However, I am much happier now that I have left and often wonder why I didn’t leave sooner. I’m terrified but also excited for the future. My family has been very supportive and without them I don’t know where I would be.